Yes, this is me, "Little Stevie" as my family called me, dressed as Henry VIII with my beloved Miss Piggy as Anne Boleyn. Having an older gay brother studying costume design in college definitely informed and helped in my playtime activities. 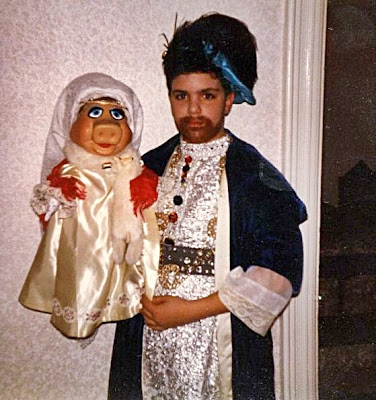 I spent hours dressing up Miss Piggy as different women in history.

Sometimes with accompanying self-costumes as her matching male companions, or sometimes just as their off-screen stylist.

I have many pictures of her dressed as Cleopatra, Carmen Miranda, and Eva Peron at varied times in her life.

I even had Miss Piggy giving speeches on the balcony of the Casa Rosada, in her traveling clothes for the "Rainbow Tour," etc.

I was a confirmed Anglophile at an extremely early age and this photo shows me at the peak of my powers. I mean, look at the details. It's as though Miss Piggy just stepped out of a Holbein portrait. Even my "stippled" Tudor beard is a revelation.

The first time I took a trip to London in the late 1990's and visited Henry VIII's historic home, Hampton Court, all I could think of was this picture. I remember thinking to myself, 'Yes. Miss Piggy and I got it right!'
Eat your heart out, Jonathan Rhys Meyers!

I think I always felt different, and I somehow always knew I was gay.
Thank God, because I wouldn't have wanted it any other way.

Seriously, what was it about Mark Spitz?